Playing with a Lizard

The main character from One Last Vigil has some fun with a plump reptile in this short, humorous excerpt from chapter 2.

As I walked along the path, my bamboo cane supporting my hitching gait, I chanced across several things that didn’t scurry from me like the trees and grass did. A large reptile was once left in the wake of stampeding vegetation. It had been turned on its side and was quite fat. It struggled to get its feet beneath itself and I couldn’t help but laugh at its dire situation.

I stopped and crouched down. “Why haven’t the trees and grass gotten to you yet? You must not be all that tasty, huh?” END_OF_DOCUMENT_TOKEN_TO_BE_REPLACED

These two characters fun to work with, especially when they’re together. They create their own humor by simply being who they are, I just put the words down on the page. Here, they go out for a night on the town together, and you may see some similarities to our beautiful port city.

Remember, to leave me comments with ideas for future stories that fit these guidelines.

Bilious clouds, pregnant with the promise of rain, slid past the moon above, stealing the dim, bluish glow that reigned over the night. At such times, Arlukent and Chaetor were forced to view the world by way of the street lights that lined the thin driveways winding through the apartment complex they resided at. END_OF_DOCUMENT_TOKEN_TO_BE_REPLACED

One Last Vigil Prologue and Chapter 1

I wrote this in the four months immediately following the passing away of my godbrother, Ricardo Cota Jr. He was afflicted with lymphoma cancer and eventually was taken by the complications that arose as a result. This was my therapy, but it became something I enjoy quite a bit and I firmly believe it serves as a good metaphor for the journey one with a terminal illness at a young age undertakes.

Look forward to seeing this available at the end of August 2016.

A vigil awaits those who escape the light

Awakening from a strange dream, one man finds himself lost within a rampant forest. His memory is fragmented and he isn’t sure which pieces explain who he is and what he’s done in life, his own name a mystery to him.

Soon, he finds that he is not on Earth at all, but in a savage place. The very flora uproots itself and terrible beasts lurk within the belly of the land and behind the thick blanket of trees, all contending to take his life.

He seeks understanding to mend his broken mind but finds that keeping from the clutches of destruction is a near impossible thing. In a world designed with his end in mind, perhaps death is his angel.

Acceptance is the way back 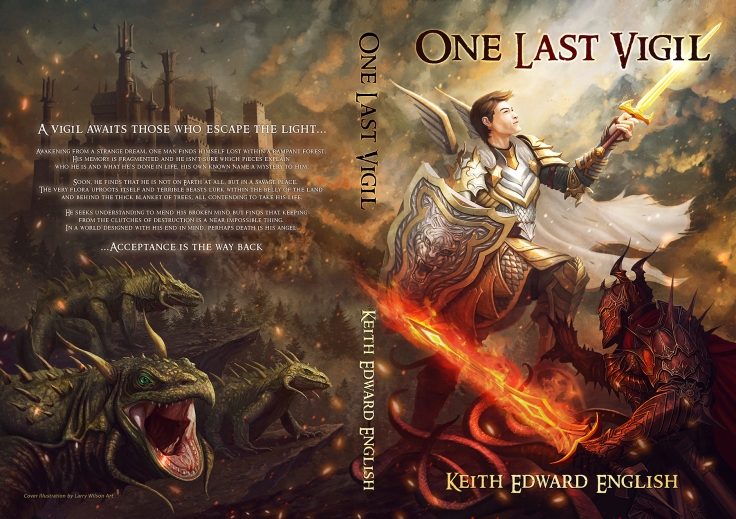